a few words about me 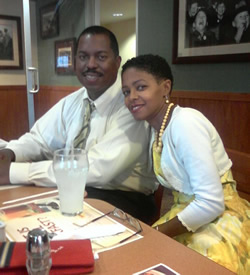 Hello friend! My name is Ken and this is my website. If you haven't already noticed, you'll soon discover something about me: I love to cook.

Am I a chef or professional cook? Nope. By trade I'm a computer programmer and web developer. However, I am also a cooking and barbecuing enthusiast and BBQ ribs are my specialty. Occasionally I accept special requests for catering jobs. I discovered very quickly that folks will pay you nicely for some good barbecue.

But being a caterer or chef is not a requirement for making lip-smakin' ribs or any of the delicious foods we've come to enjoy. Most of our mothers and grandmothers are proof of that, as are many of the local greasy spoons that we may frequent. However, you do have to care. You have to care about both the process and the art of cooking. And, above all, you have to care about the people for whom you're cooking. Preparing a meal for someone is truly a labor of love.

Personally, I've been cooking since I was a kid. My uncles are exceptional cooks and I grew up imitating them, which would eventually pay off quite handsomely.

You see, I met my future wife when I was 12 years old (Doll, as we call her, was 14). She was literally the girl next door. Two years later I cooked for her for the first time and I've been at it for over 30 years.

Every day after work, including weekends, I cook for my wife and daughters -- even if it just means serving leftovers. It's very gratifying to hear their expressions of appreciation after they've enjoyed a delicious and nutritious meal I've prepared for them.

Now about the BBQ...

Barbecuing is something I simply love doing. There's nothing more fun than cooking over an open flame. It's primitive, yet artistic -- and you get to eat your artwork!

There are several important people that are responsible for my love of barbecuing. I only wish they were all still with us. I would love to hear their voices and laughter again. This website is dedicated to them.

My Mother and Grandmother

My grandmother hailed from Fort Worth, Texas, and I was her very first grandchild. I remember eating at her table as a little boy. Perfectly seasoned grits with scrambled eggs (which I would mix into the grits) and toast with grape jelly was a Saturday morning, pre-cartoon favorite. I still use her cast iron skillets nearly every day. Those things are at least 60 years old.

When I first began barbecuing it was my grandmother's encouragement that made me really enjoy it and pursue it further. My BBQ ribs were one of her favorite things to eat and that reason alone was enough for me to keep trying to make 'em better every time. (We miss you, Nana).

I didn't grow-up seeing my mom cook anything on a grill. In fact, I don't think we even owned one. However, my mom makes THE BEST DARN BARBECUE NECK BONES in the whole wide world - both beef and pork! For me, it's a food experience that lingers in my memory as being one of the best things I've ever eaten.

My mom's BBQ neck bones are one of the things that influenced my passion for creating barbecue.

This homage to loved ones who influenced me to barbecue is not in chronological order. Before I ever made a plate of barbecue for my grandmother, I was fortunate enough to meet a legend of a man named J.C. "Buster" Perry - my wife's grandfather. He owned a vast amount of farmland down in Valdosta, Georgia.

It was on my first trip to Mr. Perry's farm that I ate some of the best food that I've ever tasted in my life. And the barbecue... I didn't know barbecue could be so tender and taste so good. Farm fresh meat and sides are an amazing thing. But the incredible taste of the meat shouldn't have been surprising. Mr. Perry raised Black Angus and Polled Hereford cattle, a.k.a. white-faced cattle (see pictures below). Can't get any fresher than that.

I've never eaten anything like the vittles I had down in Valdosta - not before nor since. And the experience left a lasting impression upon me. I wanted to make barbecue like I had in Valdosta - barbecue so good you shake your head in disbelief when eating it.

But back in Los Angeles we lived in an apartment with absolutely no place for a BBQ grill. And that's where this next wonderful man comes into view: Sergeant Robert Perry, my wife's dad. 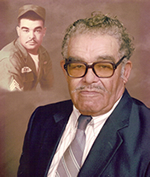 Back in 1999 I was working three jobs to save-up enough money to buy a house. Our second child was 2 years old by then and we needed a little more space.

Sgt. Perry, which is what I affectionately (and respectfully) called my father-in-law, also decided that he wanted his granddaughters to have a house of their own...with a yard and a dog. Soon thereafter he very generously helped us with the down payment on our home.

When we moved in, one of my very first purchases (even before buying the dog) was a cheap vertical water smoker from Walmart. I smoked turkeys, pork shoulders, racks of lamb and the like before out-growing that thing.

But that's the year I began, in earnest, this quest for BBQ greatness. Since then I've been smoking, barbecuing, and grilling non-stop. (Thank you again, Sgt. Perry. You have been sorely missed).

My customers as well as friends who've eaten my BBQ always tell me I should open a "rib joint". I've even gotten a couple of offers from people willing to put up the cash to get started. The problem is that I'm a bit "OCD" (obsessive compulsive) when it comes to making BBQ.

Have you ever been to your favorite rib joint and occasionally gotten a meal that was only so-so? It usually happens when you take a friend there after bragging about how great the place is. And the food usually is great, but every once in a while you'll get some BBQ that's a tad dry or overcooked.

This happens because most of your restaurants or rib joints have to prepare large quantities of meat, which has to be cooked for 4 to 10 hours overnight or in the morning. So by the time you're buying that lunch or dinner special, the BBQ has been sitting in a holding oven for hours. That process guarantees that sometimes someone is gonna get served some dry meat.

To me though, that is totally and completely unacceptable. Folks work too hard for their money to waste it on subpar BBQ, which usually ain't cheap to begin with. So until someone shows me a way to ensure the quality of every piece of meat that leaves any establishment that I might own, I'm perfectly content with occasionally selling BBQ dinners and catering when I get the time and, above all, sharing my easy BBQ recipes with good folks like you.

Well, that's the end of my little story. Thanks again for stopping by my website!